‘A singular surprise at Masonic Week’ 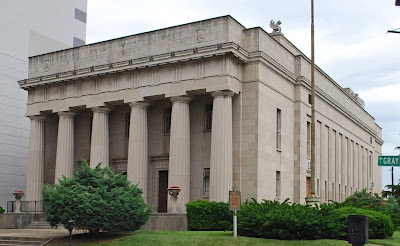 Just what the fraternity needs – an ugly, salacious scandal hitting the nightly news.

Media outlets in Louisville, Kentucky are reporting tonight that a lawsuit has just been filed there involving the Scottish Rite Valley of Louisville concerning the accidental discovery about six months ago of surveillance cameras hidden in three ladies’ rest rooms and locker room areas of the building. Metro Police have been investigating the case since this past fall and say the matter is still under review. The incident itself is not new, but the lawsuit and it now hitting the news is a new development.

Two women claim they were secretly recorded while undressing in the bathroom of the Scottish Rite Freemason’s Temple on Gray Street.
“And you really don’t understand how a person feels until they’re in that position,” said one of the victims, both of whom have asked to remain anonymous.

The women said there is no way to know just how long the video cameras were hidden inside hollowed-out coat hooks that were mounted inside the women’s restrooms. Nor do they know how many other women, and children, were recorded in the most private of places.

The hidden-camera hooks are available for purchase on the internet. The alleged victims said the hooks were mounted on the wall of the women’s restroom within the Scottish Rite.

The camera, activated by movement, was discovered by a 27-year-old woman when she accidentally knocked it off the wall last October. She and a 53-year-old friend were both changing clothes in that restroom for a costume party.
They asked not to be identified as they spoke about the moment they pulled out the memory card and watched the video.

“Panic, shock, fear immediately,” is how one of them described it.
She added that several women from the party appeared on the video, including her 17-year-old daughter. Only two were caught on camera without their clothes on. She said she was recorded while she was stripped down to her underwear. Her younger friend, seen naked from the waist up.

“There’s audio on it,” that woman said of the video. “You could hear people using the restroom. You could hear people’s conversations. We saw ourselves on it. And most importantly the one thing we did see is Scottish Rite regalia of someone hanging the hook.”

It was a red Scottish Rite hat, to be specific, but she said the face underneath that hat was obscured.

The women told a temple leader what they found, and he called Louisville Metro Police, who would find even more hidden cameras — three in all in a total of two women’s restrooms.

Police also found doubled-sided tape, the same type used to mount the hidden cameras, in each of the restroom stalls.

LMPD is now investigating it as a case of video voyeurism. And these two women said they believe they are not the only victims.

Michael Valenti, an attorney for the Scottish Rite, agreed to and then backed out of an interview with WAVE 3 News, citing the active criminal investigation. He said his clients have been cooperating with police. He did not respond to messages asking if he could guarantee the hidden cameras were no longer being used in the women’s restrooms at the Scottish Rite Temple.

The victims have now filed a lawsuit against the Scottish Rite Foundation of Kentucky and a temple leader, for invasion of privacy and negligence.

The suit names the Consistory and its local building manager ‘for negligence’ as Defendants. The actual text of the lawsuit can be viewed in its entirety on Scribd HERE. No one has been charged by police or identified as the person who installed or monitored the cameras as of yet.

(As a side note, I do find it more than a little irresponsible for the reporter to show a close-up of the coat hook camera gadget and then chirpily add that such devices are easily available on the Internet. Nice way to encourage a few hundred copycats there, Scoop – right down to loads of bored teenaged boys with too much time on their hands. That’s real Cronkite stuff.)