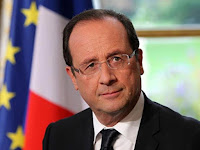 The French press is all atwitter this morning (here’s Le Figaro, for example). The current President of France, François Hollande, will visit a Masonic grand lodge as president for the first time since at least before WWII. Today, February 27th, he will spend an hour at the Rue Cadet headquarters of the Grand Orient de France (GOdF), the largest Masonic obedience in the country. The occasion is the 300th anniversary year of the official founding of the modern fraternity in London, and the GOdF is the location of Paris’ magnificent Musee de Franc-Maconnerie (Museum of Freemasonry). So, this is a nice gesture, despite the political minefield he’s wandering across.

Depending on who’s writing the headline, some are branding this visit as a shocking development. As in much of Europe, Freemasonry in France is under an enormous strain of public suspicion. Whenever a French news magazine or scandal sheet has slumping readership, a good, solid, lurid anti-Masonic cover story always plumps up sales, and they love to allege secret Masonic perfidy in the halls of the Elysee Palace. So, Hollande going deep in the heart o’ Masonland is big headline stuff today. He’s getting away with it because he’s a lame duck anyway. His name is not on the ballot in the upcoming rounds of presidential run-offs and elections – after one term in office, he’s had enough. So, he’s not committing political suicide by doing this. 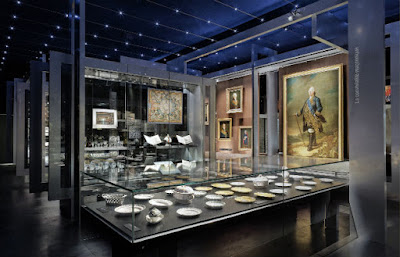 The Museum is one of the largest of its kind in the world, is supported to some extent by France’s intricate government cultural funding apparatus, and tells the story of the country’s extremely diverse Masonic landscape. As a way of clarifying that diversity, I’ll just say that representatives of 17 different Masonic obediences (what we would simply brand as grand lodges here) will be in attendance. The last time I was able to find any comparisons, between 20-25% of all French Freemasons are women. So, the Museum has a big and complicated story to try to explain, and it was to a large extent a cooperative effort with many of them. French Masons tend not to sling around accusations of “clandestine” and “bogus” at each other, and are usually pretty cordial, for a whole raft of historical reasons.

The Grand Orient is not recognized by the UGLE, the US grand lodges, or the vast majority of the Anglo-Saxon descended Masonic world, but it’s the largest by far in their country. Next in size is the Grande Loge de France (GLdF), which isn’t recognized by many either. You have to go down to the third in size – the Grande Loge National Francais (GLNF) to get to the one the bulk of us are in amity with.

Hollande will have a ten minute private chat with the GOdF’s Grand Master, Christophe Habat, a 20 minute walk through of the Museum itself, then give a 30 minute speech. The Grand Orient has never been shy of taking official public policy stands on political topics, and they have always been strong supporters of France’s strict religious separation policy of laïcité – which is one of the big reasons why Freemasons have been and remain crossways with the Roman Catholic Church, who sees us all as the primary architects of France’s extremely hard line secularism laws and policies. The Grand Orient really is kind of exactly what the Vatican accuses us all of, and they’re in no hurry to figure out the differences between us. Anyway, there have been renewed battles politically in France regarding laïcité laws and policies over Islam, especially regarding public displays of religious symbols and clothing and much, much more, so Hollande’s speech is expected to talk about that in what he thinks is friendly territory.

It should be interesting to see the headlines Tuesday morning.

NOTE: For those who understand spoken French, the video of Hollande’s address at the Museum can be seen HERE.

EDIT: Karen Kidd chided me over something that I needed to revise here. If you ever go to Paris, tell your traveling companion that she really, really WILL find the Museum interesting, and you’re not just dragging her to some boring Mason thingie after coming halfway around the world. Unless, of course, she’s a female Freemason, in which case, she might be asking at the docent’s desk about coming to a meeting herself.

The GOdF starting accepting female members (and visitors) into their lodges several years ago. Plus, intervisitation between obediences in France is pretty laissez-faire – they tend not to pester visitors much about their home lodge affiliation very closely. It’s an attitude U.S. Masons in particular can’t easily accept, that the French don’t bandy around labels like “clandestine” and “bogus.” They don’t largely because of their experiences under the Nazi persecutions during the Occupation. When the Gestapo busted up Masonic lodges, they really didn’t give a tinker’s dam about trifles like “regularity.” They simply arrested everybody in the place and confiscated the Secretary’s records so they could find anybody who stayed home that night. After the war, Masons across Europe finally developed an informal feeling that “We’re all in this boat together.” They’ve lived through purges and national laws outlawing Masonry and personal persecutions under Mussolini, Franco, the Russian czars, Soviet regimes, the occasional kings who didn’t join themselves, and others that make the Morgan period in the U.S. look like a walk in the park. When your life and freedom are on the line over you wearing an apron on Thursday nights, you tend to not really get in a lather over where somebody else got their charter.

Also note that if you ask very politely at the desk and explain that you or your spouse are Masons, they may take you upstairs and let you see one or more of their very beautiful lodge rooms, which are generally open to visitors. Despite the exterior of the building looking like a foreign departures terminal at the CDG airport plopped in the middle of a quaint 19th century neighborhood, their lodge rooms on the inside appear quite old and have an enormous variety of decoration. The Lafayette Room is particularly memorable, but all are quite unique.

Both Cadet and Le Peletier Metro stops are the same distance, about a 2 minute walk.