Why I Regret Joining Freemasonry

Why I Regret Joining Freemasonry 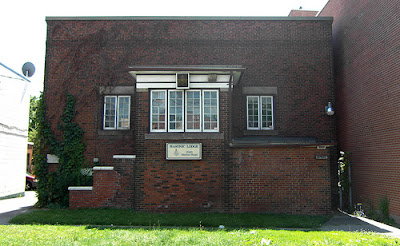 The Weston Masonic Temple in Toronto, Canada was firebombed with a Molotov Cocktail on Wednesday afternoon. A suspect was arrested last night and charged with three counts of arson.
From the Toronto City News website:

Police have charged a 36-year-old man with three counts of arson after a fire at a Masonic Lodge in Toronto’s west end.

The fire started shortly before 2:30 p.m. Tuesday at the Weston Masonic Temple on Weston Road, near Lawrence Avenue West.

There are reports a Molotov cocktail was tossed through the building’s basement window.

The blaze was small and was quickly extinguished, but it caused damage to the left side of the building.

No one was injured.

Michael Mendez was arrested just before 8 p.m. He had a bail hearing in a Toronto court on Wednesday morning.

Toronto Fire said there have been other suspicious fires in the neighbourhood, but it’s not known if they are connected to Mendez. However, police said the Masonic Temple fire was not connected to the fire at the Islamic information centre on Wednesday morning.

While news reports called it a “small fire,” reports from brethren there have noted the lodge’s dining room was destroyed. No word as to whether any damage to the lodge room itself was sustained, but it apparently cannot be used because of the overall smoke and water damage. 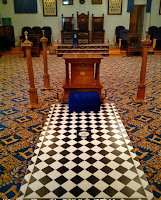 The building is home to several area lodges and appendant groups. It is one of just two Masonic Temples in the Humber Valley area, so they have all had to find the closest alternative meeting areas until the building can be restored.

Lodge member Chuck Scott told a TV reporter at the scene that the neighborhood had been plagued by a “firebug” who had attempted to set fire at a funeral home just across the street, among other locations. Additionally, there was a fire a week ago at a local Islamic Information Center, but early police statements have not connected that fire to the others in the neighborhood. Why it hasn’t was not explained. Speculation is circulating among neighbors that in a desire to characterize the Islamic Center fire as a “hate crime,” it seems more likely that all of the fires in the same vicinity were crimes of opportunity, and not ideologically motivated.

But hey, what do they know. 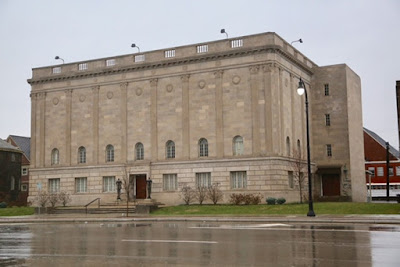 In an unrelated story, the Hamilton Masonic Temple in Hamilton, Ohio was substantially vandalized Tuesday afternoon. A man was caught in the act of spray painting graffiti extensively around large sandstone building by local police.

The mystery of who caused an estimated $10,000 in damages to a prominent Hamilton building wasn’t too tough to solve.

Hamilton police say the man responsible for the vandalism signed his name and birth date in black spray paint on the side of the Hamilton Masonic Lodge as a police officer watched.

Lamar King, 21, of Hamilton, has been arrested and charged with a felony count of vandalism and a misdemeanor charge of possession of criminal tools in connection with Tuesday’s vandalism of the building at 724 High St.

Police responded to a call shortly after 2 p.m. Tuesday and an officer witnessed King tagging the lodge with black spray paint, according to Sgt. Brian Robinson.
“The man was tagging the building and then signed his name and spray painted his birth date underneath,” Robinson said. “We will not tolerate such corrosive counter-productive behavior. He tagged ‘em, we bagged him.”

Thomas Durr, chairman of the Masonic Lodge, told the Journal-News that the organization recently completed $50,000 worth of building restoration and landscaping.

“We are looking at somewhere in the area of $10,000 or more in fixing the damage caused by this criminal,” Durr said.

The Masonic Lodge has been in the city since 1927, he said, and this is the first act of vandalism he can recall. 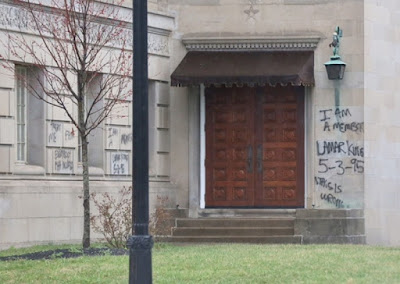 Lodge Master Seldon Brown told the Journal-News on Tuesday night that 22 places around the building were damaged by black spray paint.

Durr said the sandstone that was vandalized on the building is expensive to clean.

“You can’t power wash it because it will ruin the sandstone,” he said. “This will take a while to get cleaned up.”

King is out on bond and has been ordered to stay at least 500 feet away from the building. He is scheduled to appear next week in court for a preliminary hearing.