At The Tomb Of The Unknown Soldier

‘The conference has a contest’

At The Tomb Of The Unknown Soldier 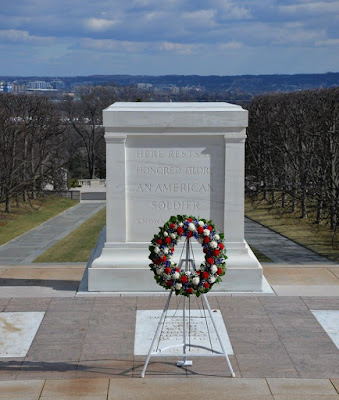 The first time I saw the changing of the guard at Arlington National Cemetery, I was five years old.  We were in Washington, D.C. on a family vacation.  I remember it very clearly.  That solemn ceremony left a very deep impression on me.  I’ve watched on television as Presidents on Memorial Day have laid the Memorial Day wreath many times, and every time, I’m struck with that same sense–a mixture of American pride, patriotism, honor, and deep respect for the sacrifices that have been made in the name of freedom.

Two years ago, I saw the changing of the guard again–more than forty years later.  Fellow Midnight Freemason Greg Knott and I flew to Washington D.C. for a Masonic event, and less than an hour after the plane landed at Ronald Reagan International Airport, we were standing at the Tomb of the Unknown Soldier.  The Boy Scouts were there that day, and during the changing of the guard, they presented a wreath–the same exact ceremony the President takes part in on Memorial Day.  We both knew what we wanted to do on our next trip out–to place a wreath on behalf of Freemasons everywhere to honor our fallen heroes.  In February, we were able to do just that.  Greg and I on behalf of Homer Lodge No. 199 (IL) and with the blessing of Our Grand Master of Illinois, Anthony Cracco.  We also asked the President and Past President of The Masonic Society to join us—Kenneth Davis and James Dillman were only too happy to do so.

The reality didn’t really set in until I was standing at the top of the steps looking out over the Tomb of the Unknown Soldier and the cemetery beyond as the Relief Commander slowly ascended the steps before us.  The wreath we provided was already in place waiting for us as we descended together in step.

It was about thirty-five degrees with a thirty mile-per-hour wind, but the four of us barely felt the bracing cold.  We were there to represent Freemasonry, so we left our winter jackets behind in favor of our suits, jewels, aprons, and gloves.  We were about to honor our fallen veterans on behalf of Freemasons everywhere by laying a wreath at the Tomb of the Unknown Solider.

Once the wreath was placed, a soldier played Taps.  It was an indescribably moving experience listening to Taps as I fixated on words on the Tomb of the Unknown Soldier: HERE RESTS IN HONORED GLORY AN AMERICAN SOLDIER KNOWN BUT TO GOD.  It was an experience I don’t think any of us will ever forget.  I certainly won’t.

Afterwards, we stood and watched the guard for some time.  It occurred to me that there had been a guard watching the Tomb of the Unknown Soldier, 24-hours a day, seven days a week, 365 days a year, uninterrupted, since I’d been there as a five year old child.  It was that important.  And the honor of being able to serve in that capacity is considered one of the highest honors in military service.

As we left the Tomb of the Unknown Soldier, a funeral procession was in progress–something that happens on average twenty-four times a day at Arlington National Cemetery.  Greg Knott and I walked to a large tree in the center of one of the plots to get a better view.  As the horse drawn cassion passed with the flag draped coffin on top, and I looked out across the cemetery at the thousands and thousands of identical stones, I was struck by the high price Americans have paid for freedom.  And yet it’s a price that generation after generation of Americans have continued to pay, because in the end, there is nothing more important to who we are as the American people than those freedoms provided us under the United States Constitution.

Todd E. Creason, 33°, FMLR is the Founder of the Midnight Freemasons blog and is a regular contributor.  He is the award winning author of several books and novels, including the Famous American Freemasons series. He is the author of the From Labor to Refreshmentblog.  He is the Worshipful Master of Homer Lodge No. 199 and a Past Master of Ogden Lodge No. 754, where is currently serves as Secretary.  He is the Sovereign Master of the Eastern Illinois Council No. 356 Allied Masonic Degrees.  He is a Fellow at the Missouri Lodge of Research. (FMLR) and a charter member of a new Illinois Royal Arch Chapter, Admiration Chapter U.D.  You can contact him at: webmaster@toddcreason.org