The man behind the tickle

New to the Collection: Fob Owned by Members of the Chillson Family

The Challenges of Research and Making the Connection

Scottish Rite Masonic Museum & Library staff get satisfaction from the rewards of research, the joy of discovering or rediscovering...
Read More 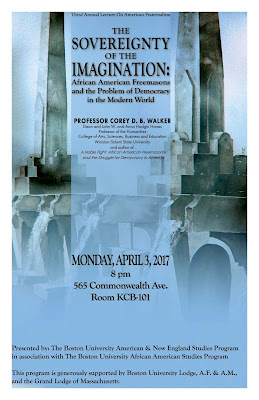 Boston University's American and New England Studies Program will present its third annual lecture on American fraternalism on April 3rd.
This year Professor Corey D. B. Walker, or Winston-Salem State University, will lecture on “The Sovereignty of the Imagination: African American Freemasons and the Problem of Democracy in the Modern World.”  Professor Walker is the author of the outstanding 2008 book, A Noble Fight: African American Freemasonry and the Struggle for Democracy in America.
The lecture is free and open to the public, and will take place Monday, April 3, 2017, at 8 pm in Room KCB-101 of 565 Commonwealth Avenue on the Campus of Boston University, in Boston, Massachusetts. Boston University Lodge, AF & AM is the generous supporter of this lecture series. (Click the poster image above to enlarge.)
By the way, A Noble Fight is an exploration of the role of Prince Hall Masonry in African American American society and culture. His premise is related in some respects to Margaret Jacob's contention that speculative Freemasons were living out the theories of the Enlightenment in their Masonic lodges in an early practical application of them. Walker's variation, in part, is that the 19th century black American lodges were likewise instructing their members in the very practical 'working tools' of democratic government. His speech seems from the description to be a 21st century extension of the similar theme.
The announcement of this speech made me go back and glance through his book again. I'm coincidentally  writing a chapter right this very moment about recognition of Prince Hall Freemasonry in Indiana, and this week I am picking my way through the formation of what became the Prince Hall Grand Lodge here. In his address to the mainstream Grand Lodge of Ohio in 1875, Ohio's Grand Master, Asa H. Battin delivered up a very lengthy presentation to his assembled brethren entitled "New Day, New Duty," in which he reported that there were 12,811 'colored Masons' at work in 539 lodges in the U.S. at that time. I'm unsure of where he got those numbers, but for a voluntary organization that cost precious household money to join during a turbulent political and social moment in history for American blacks, that was a pretty substantial cluster of men that 99% of mainstream Masons didn't know (or believe) existed. Battin was interested in recognizing the precursor to the Prince Hall grand lodge in Ohio at that time, and his committee came back with an interesting recommendation that ultimately failed to pass. Nearly every other state's proceedings for 1876 discuss Ohio's activities on the matter. It should be noted that actual mainstream recognition of Prince Hall Freemasonry wouldn't begin for another century.
Anyway, if you are in the Boston area, check out Brother Walker's presentation. (In 2008, he was a member of Jefferson Lodge 20 in Charlottesville, Virginia, of the MW Prince Hall Grand Lodge of Virginia.)
It doesn't appear that reservations are required.
H/T to Will Moore