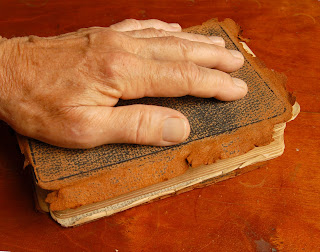 "So help me God, and keep me steadfast in the due performance of the same."
~Duncan's Ritual
We've all heard that phrase in our Lodges before.  It is with those words we take a solemn oath--and then we kiss the Holy Bible.  It's been a Masonic tradition for a long time.  It has long been held that George Washington took that Masonic tradition with him when he was sworn in as President of the United States.  He added the words "so help me God" to the end of his oath of office, and then kissed the Holy Bible--a Masonic altar Bible that was provided by St. John's Lodge No. 1 in New York no less.  And according to tradition, every United States President has added those four words "so help me God" to the end of their oath of office ever since.  It's a great story.  But there's a couple problems with that story.
Most of us know that the words "so help me God" are not part of the oath as it's presented in the Constitution.  Those words were added later, and are considered the President-elect's option to use or exclude.  The fact that the tradition started with George Washington is also been questioned.  Those four words were in use as part of the oath in federal courtrooms at that time, so it was common practice when Washington was sworn in.  But, there is no evidence that Washington added those four words to his Presidential oath of office.  Comte de Moustier, the French foreign minister, attended the event, and in a long letter recorded the oath verbatim--he did not include the words "so help me God" in his account.  And for Washington, a man who presided over the Constitutional Convention in 1787, it would have been out of character for him to have changed those words recorded in the Constitution.
So did George Washington kiss the Bible?  We don't know that for sure either, but it is less hotly debated than whether or not he said "so help me God" at the end of the oath.  The source of much of this legend of the Washington inaugural came into existence 60 years after the event, and can be attributed to Washington Irving.  Irving, as we all know, knew how to tell a story as we may remember from his famous stories "Rip Van Winkle" and "The Legend of Sleepy Hollow."
So did Washington say "so help me God" and kiss the Bible?  We don't really know.  He may have done one, or the other, or neither.  Maybe he did both.  Or perhaps it was a great story shared by a great storyteller, Washington Irving.
However, I like to think he did.  He was a Freemason, and as we all know those traditions become ingrained in us.  It becomes habit.  How many of us have accidentally said "so mote it be" after a prayer in our church on Sunday morning?  I have.  History very often misses the small details in very important events--especially small details that are familiar or commonplace by those attending.  Until we figure out time travel and go back and watch the event, we'll never know for sure.  Either way, it's either a great story about the great man George Washington, or it's a great story written by a great man Washington Irving.  Take your pick.
What we do know, is the first real evidence that the phrase "so help me God" was used in the Presidential oath was in September 1881 when Chester Arthur was inaugurated.  There's no question about it--he said it.  Whether anyone did prior to Chester Arthur is anybody's guess.  However, we also know without question, that those optional words "so help me God" have been used by every President* since Chester Arthur, including our most recent President, Donald J. Trump.
And that's the truth as I know it . . . So help me God
~TEC

*There is one possible exception.  Teddy Roosevelt according to one source was reported to have said "and thus I swear" rather than "so help me God."
Todd E. Creason, 33°, FMLR is the Founder of the Midnight Freemasons blog and is a regular contributor.  He is the award winning author of several books and novels, including the Famous American Freemasons series. He is the author of the From Labor to Refreshmentblog.  He is the Worshipful Master of Homer Lodge No. 199 and a Past Master of Ogden Lodge No. 754, where is currently serves as Secretary.  He is the Sovereign Master of the Eastern Illinois Council No. 356 Allied Masonic Degrees.  He is a Fellow at the Missouri Lodge of Research. (FMLR) and a charter member of a new Illinois Royal Arch Chapter, Admiration Chapter U.D.  You can contact him at: webmaster@toddcreason.org
Do you like it?0
Read more