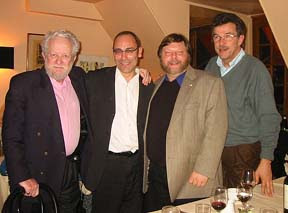 How very odd that I just posted earlier this morning about Freemasonry in France. Brother John Worlein just passed along a message this evening that Illustrious Brother Michael Segall 33° in Paris has passed to the Eternal Lodge today. He was 84.

I’m just at that age now when friends have started passing away with enough regularity that I can’t merely pass them off as rare tragedies that just come along every eight or ten years anymore. And it’s a function of Freemasonry itself that many friends I first met when I joined 18 years ago who were already much older than I was at the time are now reaching the eighth and ninth decades when life becomes even less of a sure thing every day than previous years.

So strange. I had not heard from Mike for several years, but just this month I had been e-mailing back and forth with him. I sent him a note a week ago that he hadn’t responded to, and I literally was in the middle of typing a follow up this evening just to make sure he had gotten it. Now I find out why.

I first encountered Mike, as so many others did, online. Some from Compuserve. I did on the Philalethes Society e-mail list in 1999. He was my first contact with the subject of European and French Freemasonry, and he was a prolific poster. He had forgotten more about Freemasonry than most of us will ever know. In those days, he and his lovely wife Odette were regular attendees at Masonic Week, and they made plenty of friends in person as well. Lots of those friends over the years would visit them if they traveled to Paris, and more than a few were entertained in their home near the Eiffel Tower. Many, many U.S. Masons took ideas that Mike and a small handful of others told us about practices there and introduced them into our lodges. In fact, those of us who wrote Laudable Pursuit and the nascent Traditional Observance/European Concept movement that was just starting to formulate then owed an enormous debt of gratitude to Mike and others whose names I will not mention here. I sadly will not because, as I discovered the hard way, there are European Brethren who still to this day can suffer professional and social consequences, merely for the cultural faux pas of being publicly outed as a Mason.

Mike was a member of the Grande Loge de France, which is not the obedience that UGLE and U.S. grand lodges recognize. In those days, many Masons on both sides of the Atlantic understood that the Masonic history of France was somewhat chaotic, but that the GLdF was easily as regular as the Grande Loge Nationale Française (GLNF), and with a far better pedigree. Because of our online friendships with Mike and others, a growing sentiment developed among U.S. Masons who were in their grand lines and headed to the East to push the recognition envelope and openly recognize both the GLNF and the GLdF. First to try was Terry Tilton in Minnesota in 2001, and he had much support among his own members. But the UGLE and almost a third of the GLs in the U.S. quickly ceased amity (or threatened to) with Minnesota over Terry’s temerity to recognize two grand lodges simultaneously in France. It was the first big Masonic crisis I had ever seen since joining in 1998, and it involved my online friends.

When Roger VanGorden became Grand Master of Indiana in 2002, he found out Alice and I were planning a trip to Paris. He was sympathetic to Terry’s position, and he asked me when I was in Paris to simply see for myself whether the GLdF’s lodges were regular or not, and report back. I was given special dispensation to sit in Mike’s “irregular” lodge, and he vouched for me that evening. I visited Loge La Roumanie Unie No. 717 in their grand lodge building in Paris.

Funny. Lodges are much the same wherever you go. They were short-handed that night, so they asked me if I would sit in the Treasurer chair, since I was Treasurer back home. I had to quickly scramble to manage to blurt out in my pidgin French, “Venerable Master, to the best of by knowledge, the books of the lodge are in order.” Were there differences? Of course, there always are, everywhere you go. But everything I saw firsthand that night was perfectly regular in every way.

Meanwhile, while I was playing with Masons that night, Mike’s wife Odette had Alice packed into their Smart Car and took her on a terrifying, high-speed sightseeing trip all over the city that would have put an Italian cab driver to shame. They got a parking ticket at Sacré-Coeur. Odette snatched it off the windshield, shrugged with a proper “harrumph,” and jammed it into the glove compartment, which was already overflowing with scores of others just like it.


Ultimately, the GLdF and America imbroglio melted down completely. Terry Tilton was compelled to give up his dream, Minnesota was immediately forgiven by the world for its terrible transgression, and U.S. Masonry quickly settled back into its sleepy complacence and ignorance again. But the friendships remained, and still remain. As do the memories. Alice and I have been back to Paris many times, and we enjoyed the occasional dinners with Mike and Odette, like the one in the photo above in 2006. I went over and met Philippe Benhamou, the co-author of the French version of Freemasons for Dummies, and Mike and Odette and Brother Michel Singer joined us that evening. And others.

Mike wrote under the pseudonym of Michel Saint-Gall, and his most popular work was the indispensable French reference book, “Dictionnaire du Rite Ecossais Ancien et Accepté” (Dictionary of the Ancient Accepted Scottish Rite), which illuminated the numerous Hebrew words, phrases and symbolism that appear in the Rite’s rituals around the world, including Pike’s. 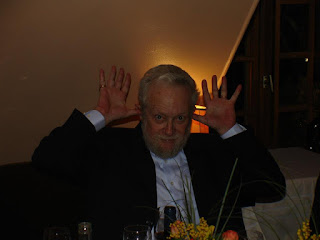 In his last email, he said, “We just celebrated our 60th wedding anniversary and things hold well together, even if we quarrel every other day. It works as an excellent cathartic, Odette has long stopped throwing plates at me, and then we do laugh a lot too. At and about most everything.”

There are many other memories of Mike that I won’t bore anyone but Alice with, or those who want to sit in a bar and reminisce sometime. But his death leaves a very big hole in my Masonic heart, and I suspect it will with others all around the world who knew him only electronically over the years. He touched more Masons in more ways neither he nor they would ever know. Mike brought Masonic light to many from a world that was dark to most of us, and that debt could never be repaid. His column is broken, and his brethren do indeed mourn.

Tuesday 2/28/17:
Word comes that Michael suffered a pulmonary embolism which stopped his heart for 25 minutes. He never awoke. Odette has said he would never have accepted being trapped in his body as a vegetable, so perhaps this was its own sort of blessing.

Brother Michel Singer has informed us all via Facebook that Michael’s funeral will be held at the funerarium of Père Lachaise Cemetery in Paris on Thursday, March 9th, at 2 PM (1400). I can’t think of a more fitting place for his Earthly remains to be returned from whence they came than this very special place where so many brilliant men have made their way before him. All are welcome to attend and make their final tribute. He is to be cremated.

Additionally, I have Odette’s e-mail address, which I will be happy to pass along privately, should you wish to contact her. Please send me a note at hodapp@aol.com 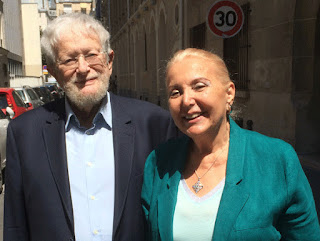