This holiday season as we think about ideas of unity and goodwill toward all, we highlight this 1934 photograph of...
Read More

Boston-born Benjamin Franklin (1706–1790) established what became a successful printing business in Philadelphia as a young man. From an early...
Read More 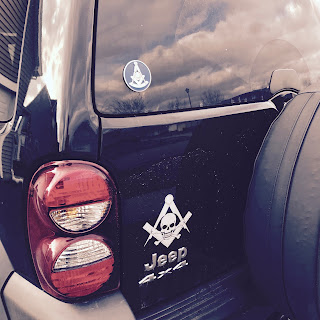 Last night on the way home from work, I took serious notice of a "whiz" noise coming from my front left tire. I thought maybe it was under inflated. When I got home, I checked it out and was instead convinced it was a bearing issue. And if its one set of bearings, you can bet the other set isn't far behind. So on my way home the next day, I took my car to the local shop. $900 was the estimate and it needed to get done.

Fast forward a few hours, and about one hundred pages of the book I was reading and the gent called me up to the counter. The Jeep was all set. After some brief conversation about the bearings, he casually said, "I noticed the symbols on the Jeep. Freemasons right?" I confirmed to which he asked, "How does one get started in that?" I smiled politely, opened my wallet and handed him my phone number and said, "You just did."

He gave me his card and number as well, we shook hands and I was off. The "whiz" noise was gone and the Jeep is driving like her old self again.

RWB, Robert Johnson is the Managing Editor of the Midnight Freemasons blog. He is a Freemason out of the 1st N.E. District of Illinois. He currently serves as the Secretary of Waukegan Lodge No. 78 where he is a Past Master. He also serves as the District Deputy for the 1st N.E. District of Illinois. Brother Johnson currently produces and hosts weekly Podcasts (internet radio programs) Whence Came You? & Masonic Radio Theatre which focus on topics relating to Freemasonry. He is also a co-host of The Masonic Roundtable, a Masonic talk show. He is a husband and father of four, works full time in the executive medical industry and is also an avid home brewer. He is currently working on a book of Masonic essays and one on Occult Anatomy to be released soon.
Do you like it?0
Read more